Are There Dangers to Drinking Absinthe? 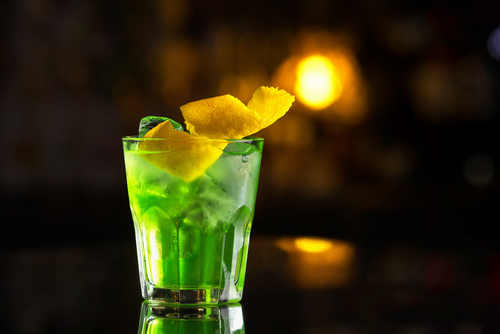 Absinthe is an herbal liquor which contains anise, fennel and wormwood. Some versions add other herbs and flowers as well. Absinthe has a green color from chlorophyll of the wormwood leaves. Absinthe’s former reputation was that it could cause convulsions and hallucinations due to some of the chemicals. Thujone, a component in wormwood, was of particular concern as it can cause convulsions in high doses. Find out why absinthe may contain other dangers people are not aware exist.

Historically seen as dangerous and addictive, absinthe is a psychoactive drug which may cause delirium, epileptic attacks, vertigo, hallucinations and insanity. People who drink absinthe may die from alcoholism, alcohol poisoning or drinking it unregulated as it contains other additives.

Absinthe is now legal in every country which alcohol is legalized. The United States lifted the 100-year ban on the drink, provided absinthe is free of thujone.

Alcoholism is a problem which exists for many people who are unable to control behavior or drinking which leads to negative consequences. It is a progressive, debilitating disorder which includes some of the following symptoms: cravings, tolerance, physical dependence, loss of control and other physical issues. The person who drinks too much may also suffer employment, personal and social consequences along with legal ramifications associated with drinking behavior.

Consistently drinking alcoholic beverages, including absinthe, for a long period of time can lead to addiction. Should a person attempt to quit using alcohol, it may lead to withdrawal symptoms including:

Absinthe is no different than other forms of alcohol in that it has addictive properties and may lead to health complications. Alcoholism is a serious problem which requires attention to find help for recovery. A person who is recovering from alcoholism has a long journey in sobriety but sober living is preferable to letting alcohol ruin a person’s life. Rehab is a great place to seek help for recovery when drinking gets out of control for those who are ready. It is never too late to quit drinking and get on the road to recovery.

©2021 All Rights Reserved. Design & Development by Goldman Marketing Group | Sitemap | Privacy Policy The information available on this web site is provided for informational purposes only. This information is not intended to replace a medical consultation where a physician's judgment may advise you about specific disorders, conditions and or treatment options. We hope the information will be useful for you to become more educated about your health care decisions. If you are vision-impaired or have some other impairment covered by the Americans with Disabilities Act or a similar law, and you wish to discuss potential accommodations related to using this website, please contact us at